Welcome to our Marvel’s Avengers WAR TABLE Weekly Blog, where we give you the scoop on news, marketplace updates, developer interviews, and more!

First up, War for Wakanda.

We’re premiering our War Table for Wakanda video on Aug. 16. It breaks down everything you've been asking about our Expansion, from story to gameplay to our major user interface changes, and more.

We know you’re excited about the future beyond War for Wakanda – we are too! So expect some news in the coming weeks. For now, our focus is sharing our Expansion with you and giving Black Panther his moment in the spotlight.

We know you’ve been dying to see Black Panther’s combat and gameplay – we’re finally going to show it to you! Join us for our War for Wakanda Launch Party livestream hosted by Kinda Funny’s Greg Miller and Ms. Marvel voice actress Sandra Saad over on our Twitch channel: www.twitch.tv/crystaldynamics on 8/16 at 10AM PT.

Greg and Sandra will be interviewing our incredible developers and voice cast immediately following the premiere of our War Table for Wakanda video at 10 AM PT.

Our voice actor interviews include:

And our developer interviews include:

Be a legend with the Legendary Sale until August 17! Select Legendary Outfits and Emotes are 50% off, including favorites such as Hulk’s Gladiator, Iron Man’s Prometheum, and the featured outfit below.

This week we’re rotating Black Widow’s Marvel Studios’ Avengers: Endgame outfit back into the featured section of the Marketplace. Her black suit features back-mounted batons and her iconic red emblem on the belt buckle. 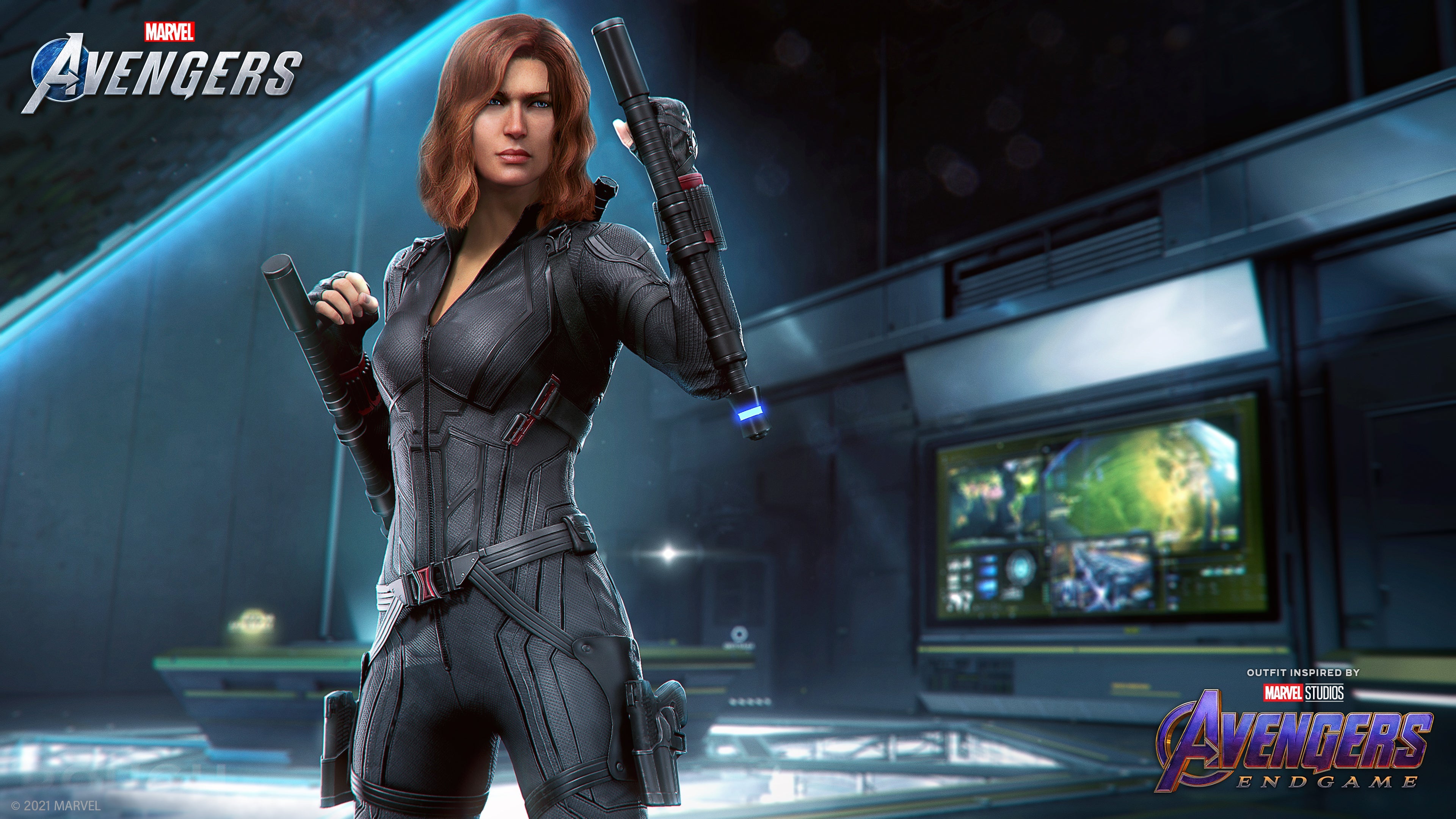 The Terrigen bundle returns to the Marketplace for a second week, featuring fully charged outfits for all eight Heroes. We’re also debuting our Monatomic Bundle this week, which also offers one Monatomic outfit variant for each Hero as well. 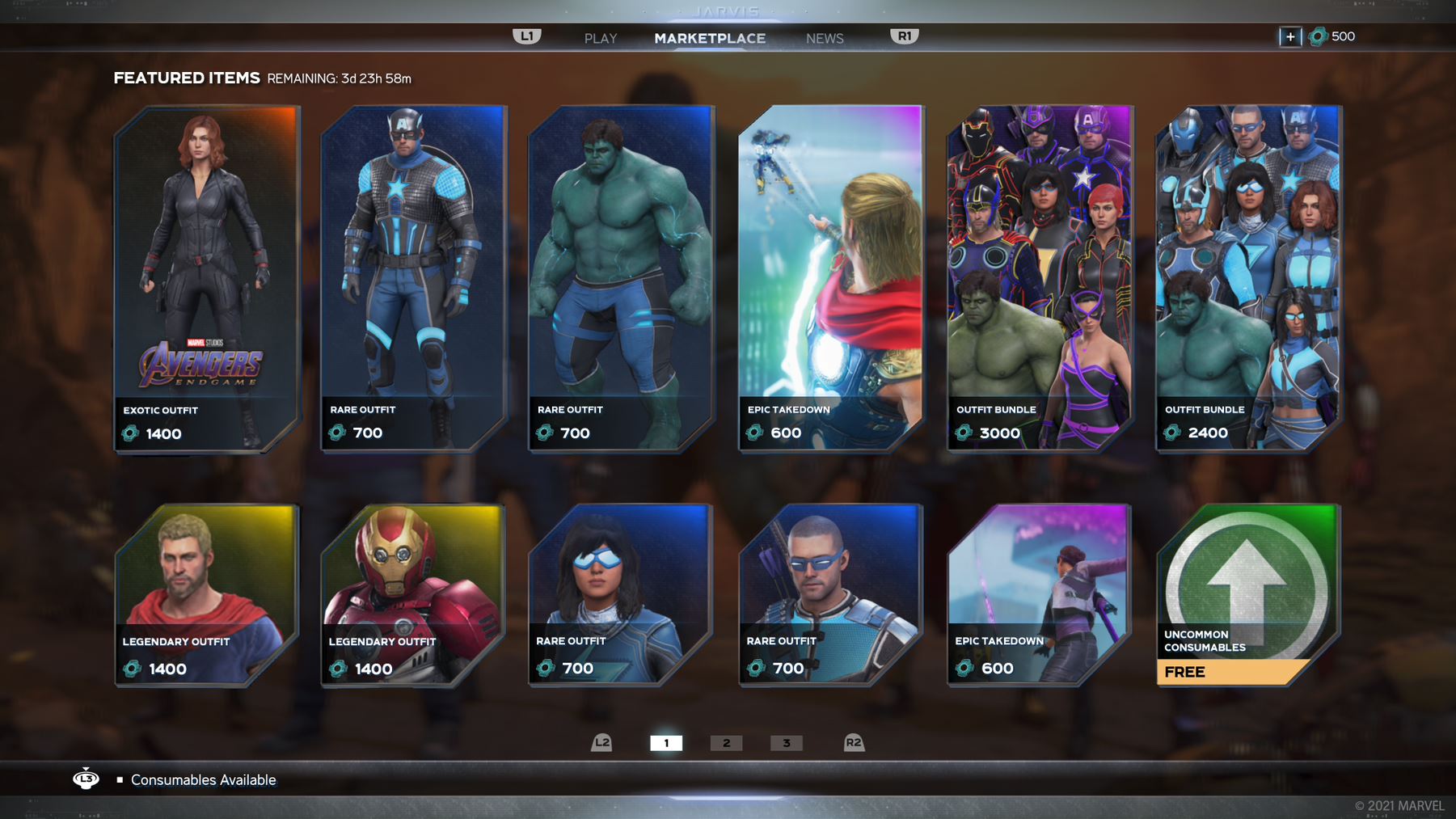 This week’s free item is a 2 hr. Hero Catalyst +50% XP Booster. (Hero Catalyst XP boosts are additive to any experience boosts we may have running in the game.)

This week we interviewed systems designer Brian Waggoner on the Corrupted Vibranium Event running from 8/19 - 9/2 after Black Panther: War for Wakanda’s launch. Read the blog HERE.

We also dove into the new enemy faction we’re introducing in our Expansion – the Klaue Company – with combat designer Matt Guido HERE.

War for Wakanda and our 2.0 Patch rolls out a UI overhaul for the game that addresses a lot of the feedback and concerns we’ve heard from our community since launch. Here’s a breakdown of all the changes in our Twitch stream HERE.

Finally, we announced an upcoming livestream with the Kinda Funny crew on August 16 at 10 a.m. PT on our Crystal Dynamics Twitch channel: www.twitch.tv/crystaldynamics. Ms. Marvel voice actor Sandra Saad will be joining us alongside Kinda Funny’s Greg Miller as we show off Black Panther gameplay and discuss our War Table for Wakanda deep dive video.

We pulled up our virtual chairs and sat down with senior artist Brendon Bengtson, who was also in our Black Panther outfits livestream on 7/31!

1. Can you give us a quick introduction about who you are and what you do on the team? What have you done on Marvel’s Avengers? (that you can share!)
Hello world. My name is Brendon Isaiah Bengtson. I have been Lead Character Artist on Marvel’s Avengers for the last year and a half and have been on the project for almost 4 years total now. I can’t believe it’s already been almost a year since launch. It’s been a crazy amazing ride and an absolute honor of a lifetime to be able to work on such iconic characters in the Marvel universe. On this massive-of-a-scale-of-game our internal team pretty much collaborated on all the characters. The amount of work was monumental, so we all had a chance to work on everything at some point. We have an amazing Character Team here at Crystal along with our amazing production partners.

2. Besides Marvel’s Avengers, what other games have you worked on, and what was your role on those projects?
Before coming on board with Crystal Dynamics, I was at EA Visceral for a bit working on an unannounced Star Wars game. I was disheartened to be among those laid off by the closing of the studio, but I try to count my blessings. If that didn’t happen, I wouldn’t have landed here at an amazing studio working on one of the largest IPs in the entertainment industry. I still pinch myself a few times a week to make sure I’m awake. Haha. Before that I was at Sony down in San Diego working on a few projects; MLB The Show 2018, and for a very brief second The Last of Us 2. If we go back further, it was mostly small games and Indie projects.

3. What led you to working in the video games industry?
By the time credits rolled the first time I saw Toy Story, that was it. I made up my mind I wanted to be in some kind of computer graphics entertainment. Wow, can’t believe that was all the way back in 1995. Ooooof. Being a long-time gamer, I mean, like long time, like Intellivision days, I thought it would be best to merge my passion for gaming and my new avenue for digital art. I’d always been drawing but now I was on a mission. One of my favorite things to draw were comic characters. I loved studying all the muscles and forms and was just floored with how well the comic artists made the shapes look so dang good. All that together pushed me towards Character Art in general. It was the perfect, digital arts, love for gaming, and making/drawing characters trifecta. I’ve been on this mission ever since. It has been a very long road with many sidetracks, obstacles to slalom, mountains to climb, and rejections to stomach. But one of the important things that helped me overcome all those was, every rejection, every no, every “your artwork is good but…”, was all fuel for the fire to keep me going. Keep the fire hot and keep forging ahead. I WILL make it. I WILL do this.

4. What’s your earliest gaming memory?
An early gaming memory, not my first, but most definitely the moment that had the highest impact on me in terms of gaming was Christmas 1983. My mother, father, and 3 older brothers just finished opening presents Christmas morning when all of the sudden my oldest brother did the quintessential, “Wait a minute, what’s that over there in the corner?! Is that one more present?? I wonder who that is for?” Not me or my other two brothers had any idea what it was. We opened it and yup... there it was, one of the coolest things in the universe: The NES. We all just lost it. There was screaming, yelling, crying tears of joy, it was mayhem. My parents weren’t the happiest people on the planet at that moment, but we sure were. Super Mario Bros and Duck Hunt were all-consuming. It. Was. Epic.

5. What do you wish everyone knew about games development?
It takes a lot of work. Like aaaaaaa lot. I’m surrounded by some of the most talented artists, designers, producers, QA team, directors, co-developers, and studio heads in the world and we ALL put everything into these experiences. That can easily take a handful of years of work with an army of developers, let alone all the support. We could never do our job without one of the best IT departments, HR, Brand, and every other piece of the puzzle. Game development, like a lot of art is one of those industries that doesn’t just end when you go home. We continue to hone our crafts on off time, taking opportunities to expand knowledge, take courses and workshops, practice new techniques, and experiment in new mediums and pipelines. Being on the cutting edge of realistic-style AAA games, we always have to lean into new technology and techniques. We continue to refine our skills and development and bring great stories and gameplay along the way.

6. What is your favorite thing about working at Crystal Dynamics?
Honestly, it’s the people. It starts from our studio heads: Ron Rosenberg and Scot Amos. They set such a great precedent for the Crystal family and harbor a caring and inviting atmosphere. From there, the amount of talent and passion throughout all levels of the studio just makes you want to do your best, then find a way to do your best even better. You can just feel how much people care about your well-being as a person, not a worker. That is a true blessing in these times.

7. Can you give our community a hint at something fun you’re currently working on?
It’s so dang cool, it’s….. ah, no, can’t tell you 😊. Not yet. Haha, no but seriously. It takes quite a bit of time and a colossal effort to craft AAA games and wouldn’t want to ruin the payoff at the end. But for now, you can bet your darn tootin’ socks we are making more Marvel’s Avengers stuff for you.

8. If you could give a prospective Crystal Dynamics employee one bit of advice, what would it be?
Be yourself and be awesome. Be passionate, knowledgeable, caring, and inspirational about your craft. We want to add great people to our family, not drone workers. Most of all, being realistic, be patient. That was one of the hardest lessons I had to learn waiting to get into big studios. If the answer is no, it’s just a “not right now”. Shoot, I had a hard no from a big company at one point, then after a few years of hard work and honing my craft, I actually had that same company fly me out to their studio and offer me the job exact job I didn’t get previously. That felt awesome. The stars need to align just right to land and sometimes it happens and sometimes it just isn’t right, for now. Keep going. Never let any “no” kill your fire. Let it fuel you to do better, learn more, give back to the community, make better art, help others, and then eventually before you know it your stars will align. Everyone – and I mean everyone — has a wildly different “come up” story. It is a different path for everyone. Find your path. Be true to what you love doing and it will come. Now, go practice your craft! 😊

9. Who are your heroes?
I have a lot of people I look up to, but if I were to narrow it down to heroes, I’d say teachers, instructors, and mentors. It takes a special kind of person to share knowledge and foster creativity. It for sure is not easy and for those who take time to inspire and instruct, I have a ton of respect for them. It’s not about what you can do, it’s about what you can give back. How can you help others to be great? That is an incredible and heroic undertaking.

10. Anything you want to say to our community?
Thank you. Thank you for taking these journeys with us. Thank you for coming along for the rides in our theme parks. Thank you for your investment in our worlds and characters. Thank you for feedback and for sticking with us through ups and downs. Thank you for inspiring us to make our next games even better. But most of all, thank you for being part of the Square Enix, Marvel Games, and Crystal Dynamics family. Catch you out there!

Check out some awesome screenshots captured by our community this week using our in-game Photo Mode. Share your artwork on social and tag us @PlayAvengers, and we may feature your epic photos in future blogs! 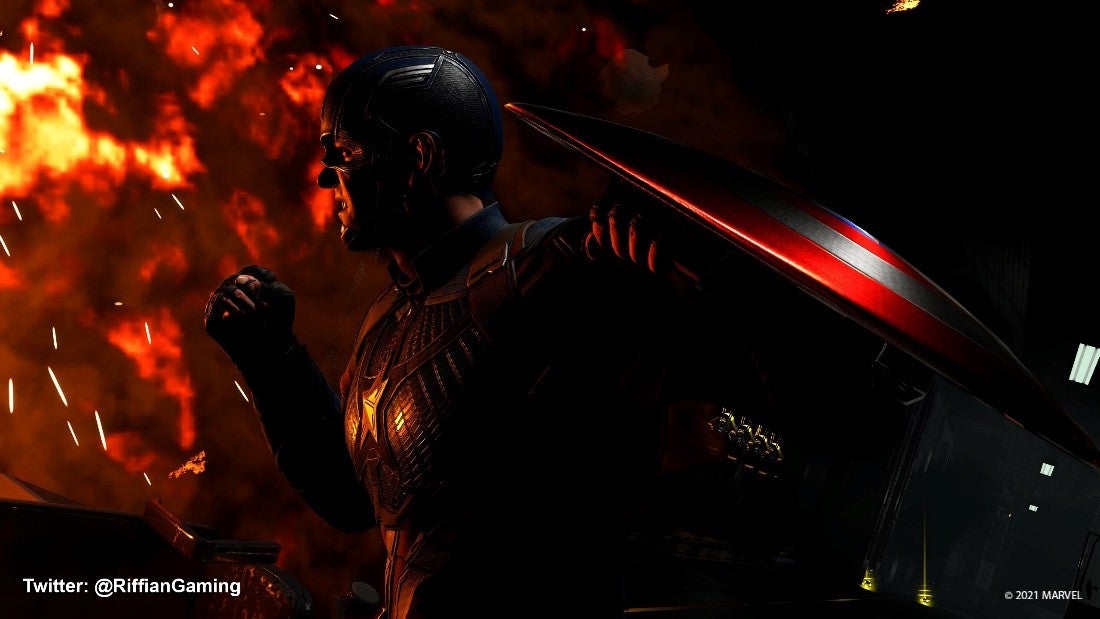 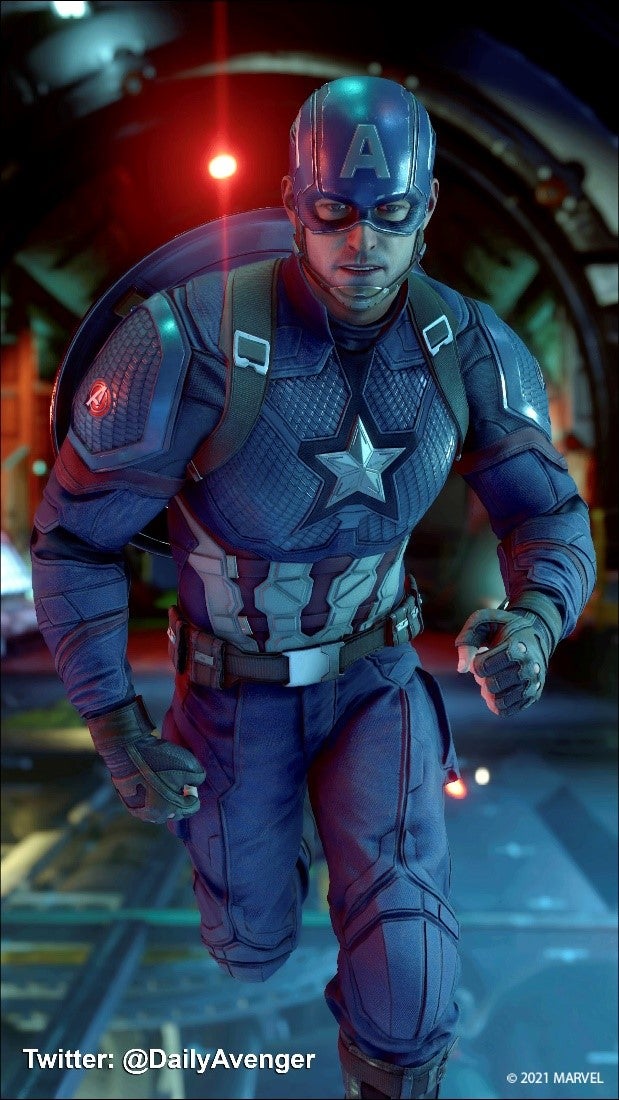 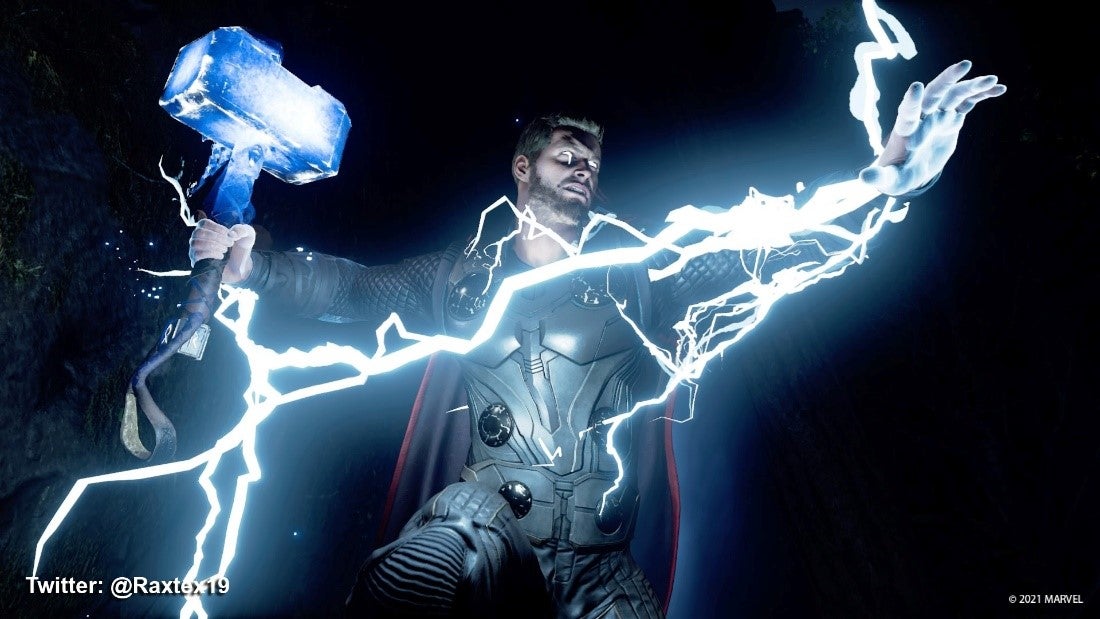 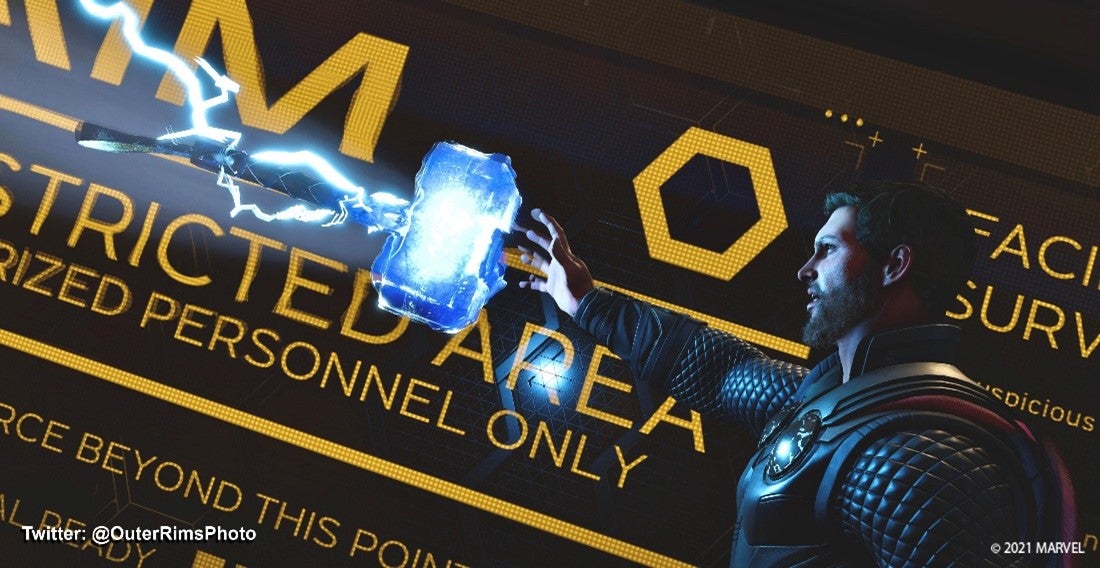