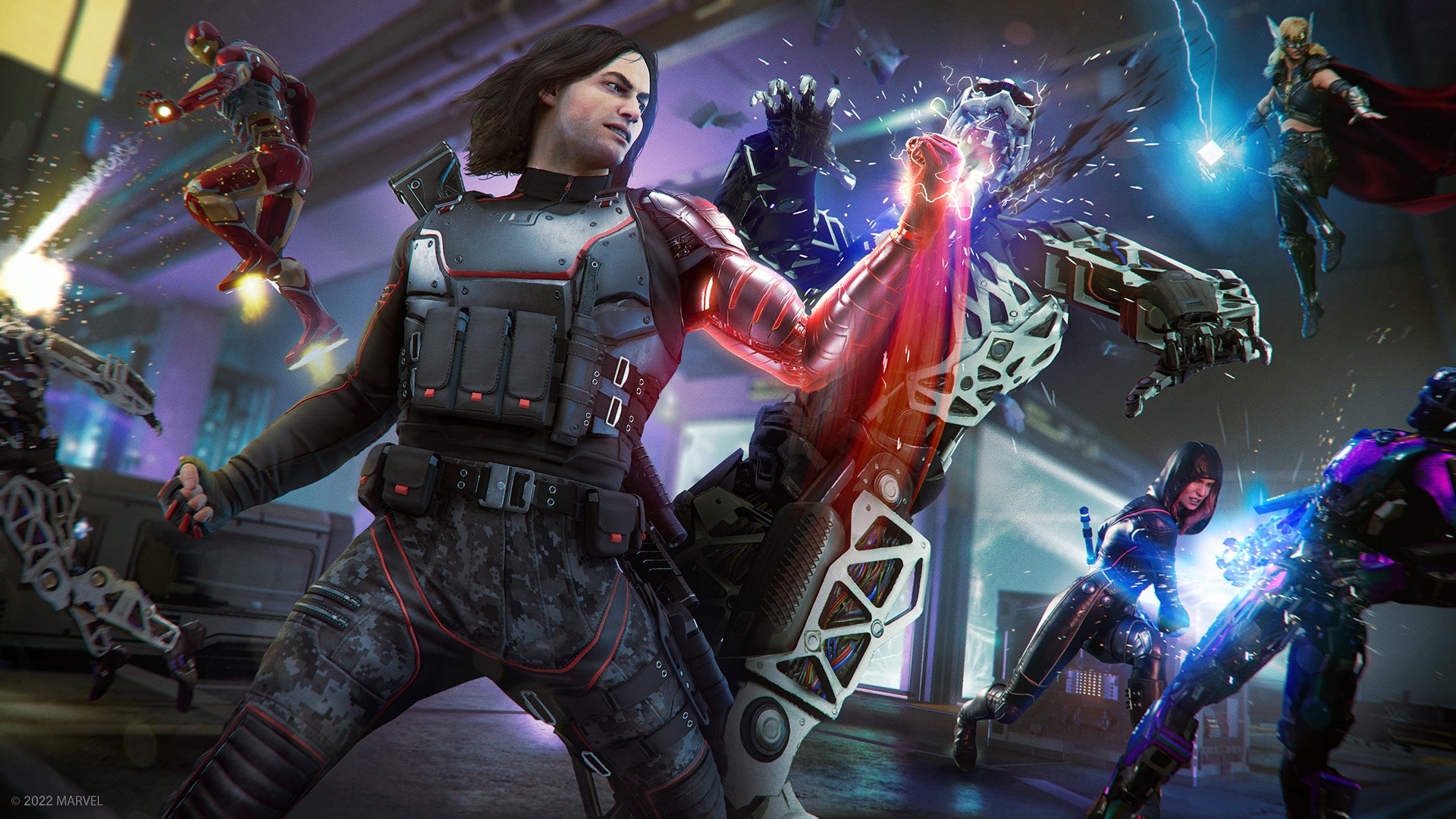 He started out as an all-American sidekick but ended up being the Iron Curtain’s most lethal assassin… He is Bucky Barnes, the Winter Soldier.

When Ed Brubaker and Steven Epting broke the longstanding rule that “Bucky stays dead,” they gave fans one of their most loved characters. With over 20 years in ink, you know we had no problem pulling together a wardrobe for our newest Avenger that will leave players drooling for more.

We wanted fans to be able to identify him from first glance, but recognize this Winter Soldier is unique to the world of Marvel’s Avengers. We realized the signature segmentation of his cyborg arm through an anatomically derived design and updated his drummer boy tunic with an armored bulletproof vest. We also gave him modern-leaning fatigues and a technical base layer to capture a cutting-edge mercenary feel.

And for those that feel he’s just not the Winter Soldier without a domino mask, we have one you can unlock by engaging with his hero card: Inspired by his reemergence in Captain America (2004) #6, this is a Winter Soldier still under the control of his handlers. A weapon to be pointed with deadly accuracy, he is kitted out with tactical uniform elements and his signature “first appearance” arm cable, making him an imposing figure to behold. To make sure his identity is kept secret from his targets, we added a carbon composite faceplate with haunting, red-tinted lenses. Sometimes it takes a change of scenery to heal old wounds. In helping to defend Wakanda from AIM, the Winter Soldier has been allowed time to immerse himself in their culture. With this look he keeps some elements of his western gear but enhanced with a Vibranium-laced vest and improved arm…both gifts from King T’Challa and Shuri. Awakening from AIM’s control leaves Bucky lost and distant. To cope he plays things close to the vest and withdraws from those he wishes to keep safe. This outfit is designed to empathize with his emotional state by shrouding his unique characteristics in everyman clothing, allowing him to stay inconspicuous and disappear easily should he need to. 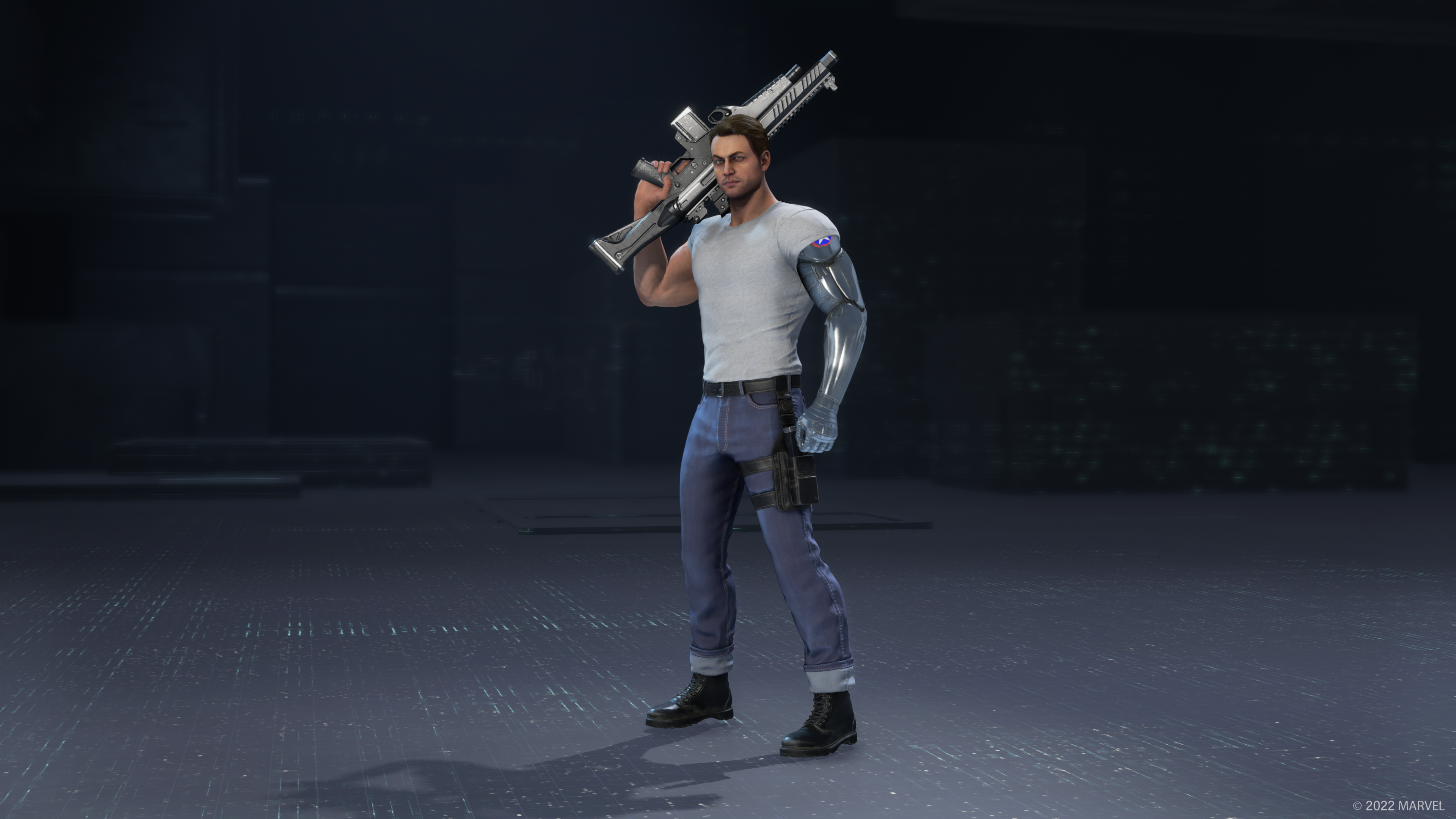 When Bucky was able to start reconciling his past ordeals as the Winter Soldier, he began to take on more of a “cleaned up” look in his stories. We wanted to give fans the opportunity to embody that, so we created a casual, yet 40’s-influenced look for him consisting of denim pants, cotton tee, and close-cropped hair. His arm has been upgraded too, looking more natural and heroic in its assembly. 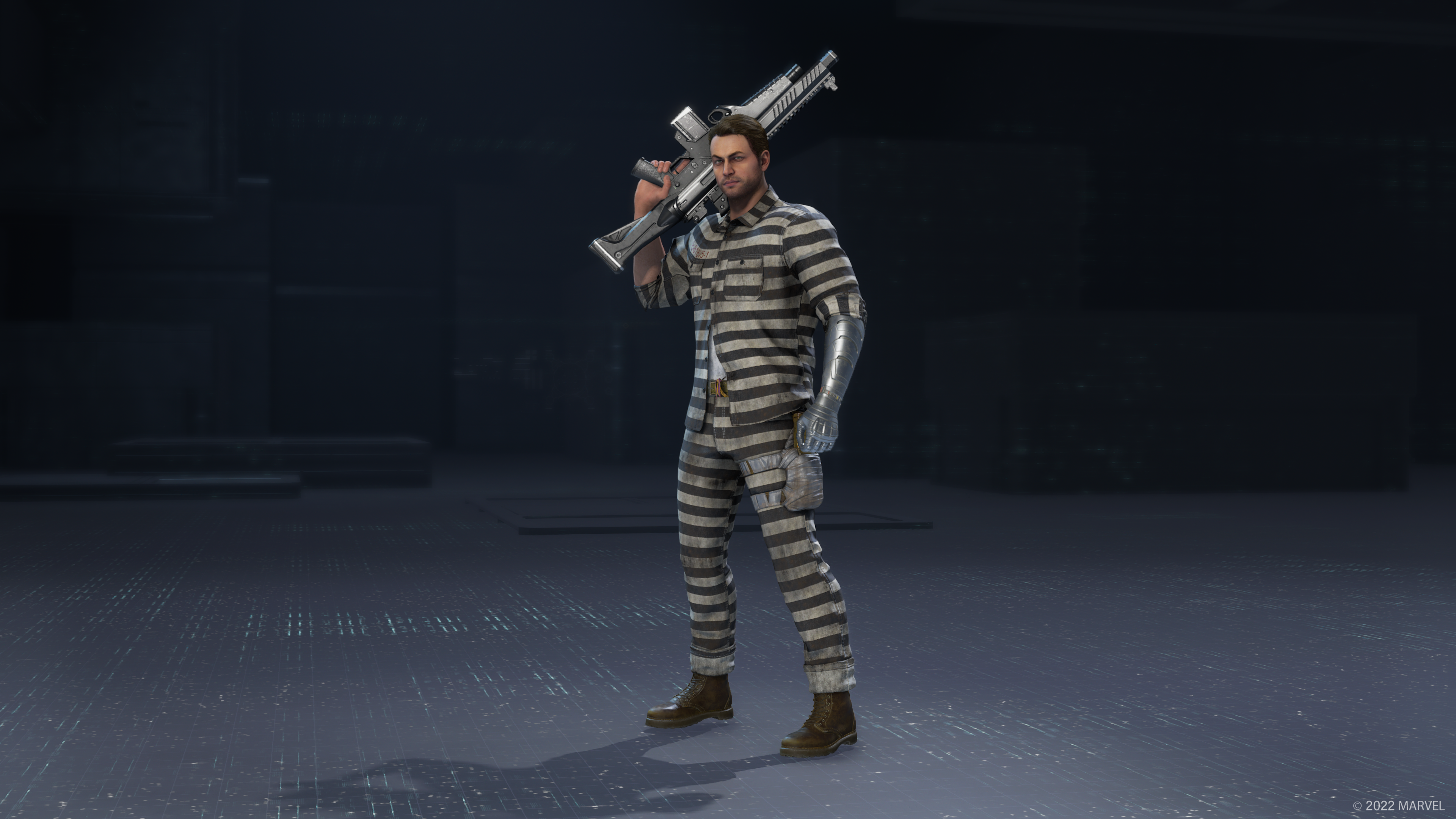 In Captain America (2004) #616, Bucky was locked behind the gates of a Siberian gulag to pay for crimes committed as the Winter Soldier. We made sure to accurately interpret his heavy fabric prison-issued uniform, and equipped him with hastily-crafted gear that would be essential to protect himself on the inside. While Cap was the camera-facing icon of America’s ideals, Bucky was secretly tasked with the darker aspects of their operations. We decided to pay homage to this by capturing his Bucky uniform in its classic color scheme, but through period correct fit and finish. This is a true wartime Bucky… one you would fear if you were on the other side. Before James became the partner of Captain America, he was a soldier. We wanted to celebrate this phase by giving him a WWII-era appropriate look, but with a more bespoke color palette forecasting his eventual transformation into Bucky. 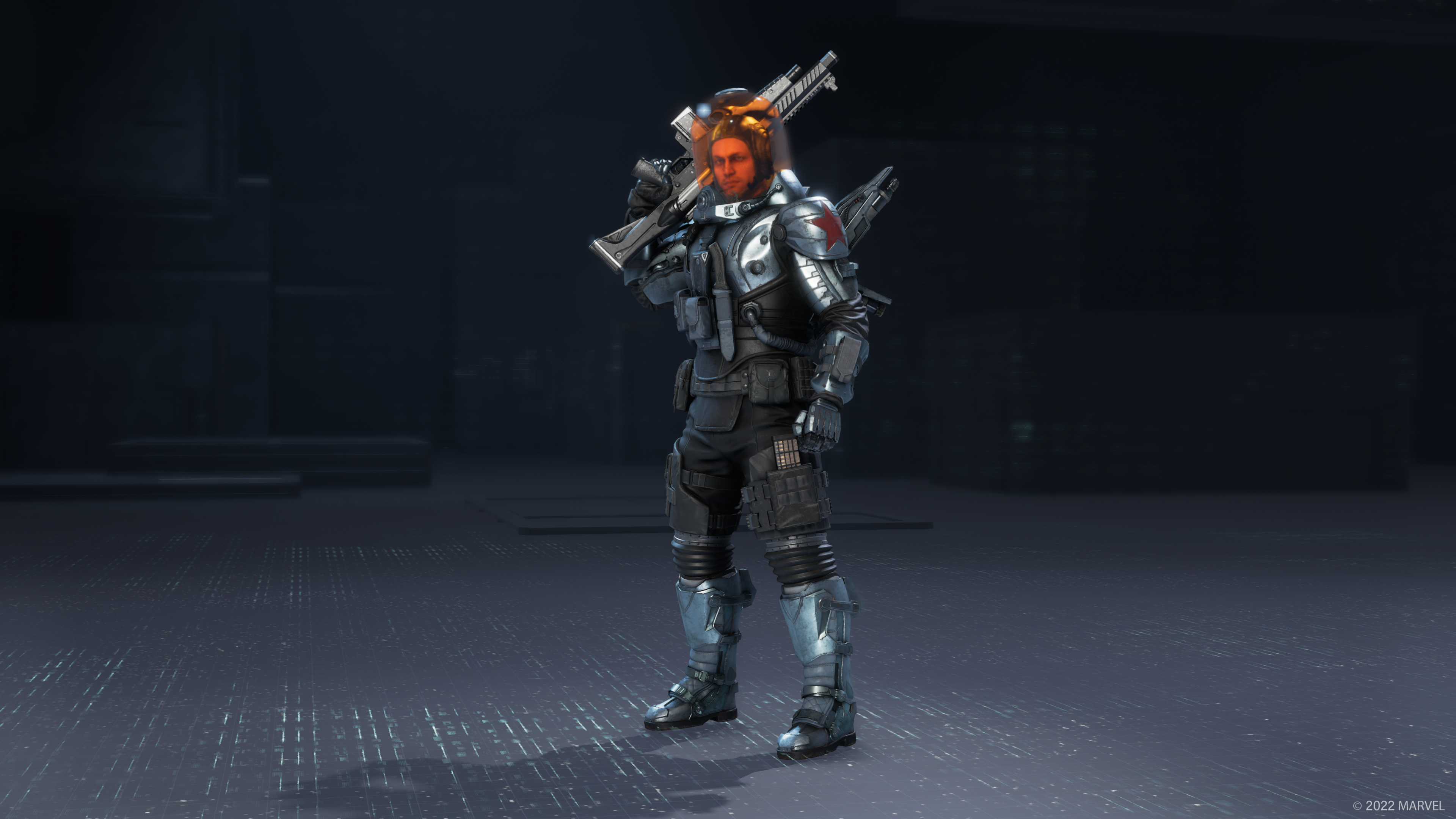 After Nick Fury is removed from his post as the “Man on the Wall” in the Original Sin event, The Winter Soldier takes on the mantle of Earth’s protector. To properly act as the first line of defense against alien threats, this deep space suit, inspired by the art of Mike Deodato, seeks to capture a sci-fi retro feel but with modern details spacefaring fans will appreciate. 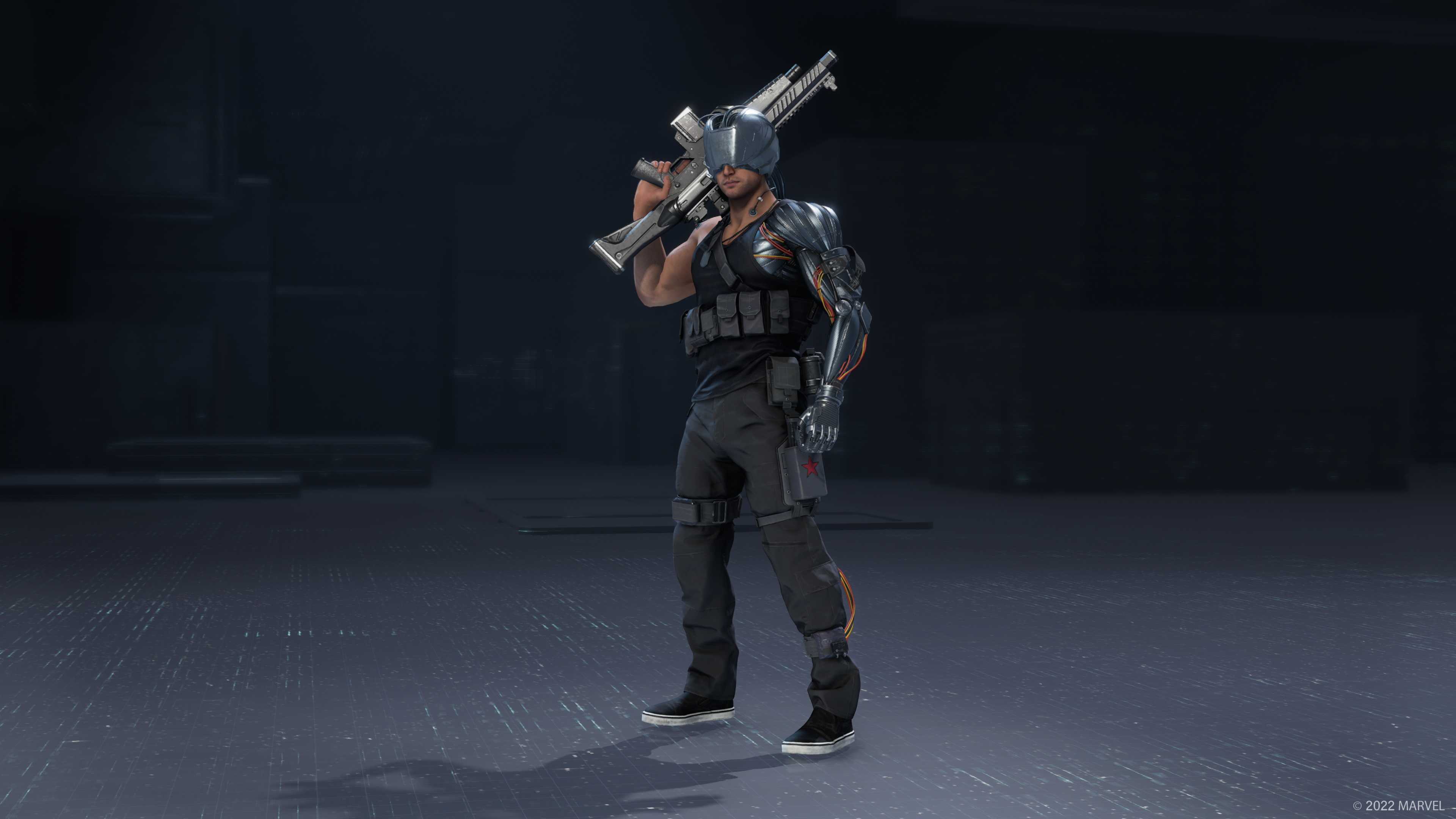 Appearing in Captain America (2004) #11, an amnesiac Bucky Barnes is subjected to grueling experiments to mold him into the prefect assassin. We wanted to capture this pivotal moment in his history by recreating the feel of the comic panel in polygons, complete with his first gen brainwashing helmet and prototype cyborg arm.

We have more must-have cosmetics on the way, so make sure to monitor comms for Avengers updates, and enjoy building YOUR Winter Soldier when he goes live November 29th!