Hi, everyone. We’re Tore and Oscar from the development teams at Crystal Dynamics and Nixxes Software, here to give insight into how we created a new biome, the Wastelands. It’s a region of Future Imperfect that is based on the Old Man Hawkeye comics, especially the Eye for an Eye arc.

In our timeline, the Kree, a hostile alien civilization attacks Earth for reasons unknown. A global battle ensues, causing irreparable destruction and killing most life on the planet. The Kree are deploying their giant Sentries, ravaging Earth’s defenses. Humans managed to take down some of them and their metal carcasses are still littered across the deserted world.

The devastation was so large that massive landmasses shifted, causing catastrophic damage to the world and destroying most of the infrastructure. The atmosphere has become so polluted that the sun is rarely visible, causing any kind of life to be suppressed. There is almost no vegetation, no animal life, and barely any humans left.

When building the Wastelands, we had a few guiding principles.

It should be disorienting since tectonic plates have moved around, new canyons have been created, nuclear bombs have gone off. That is why the Wastelands is its own region on the War Table – it is in an undefined place.

There should be points of interest (POIs) every so often to allow players to view the world and immerse themselves in it. There are different types of POIs – some are remains of ordinary human life, like ruined buildings or a city block, while others are destroyed infrastructures, like a collapsed tunnel with a highway running through or a decimated bridge. Here are a few early concepts versus what they look like now. 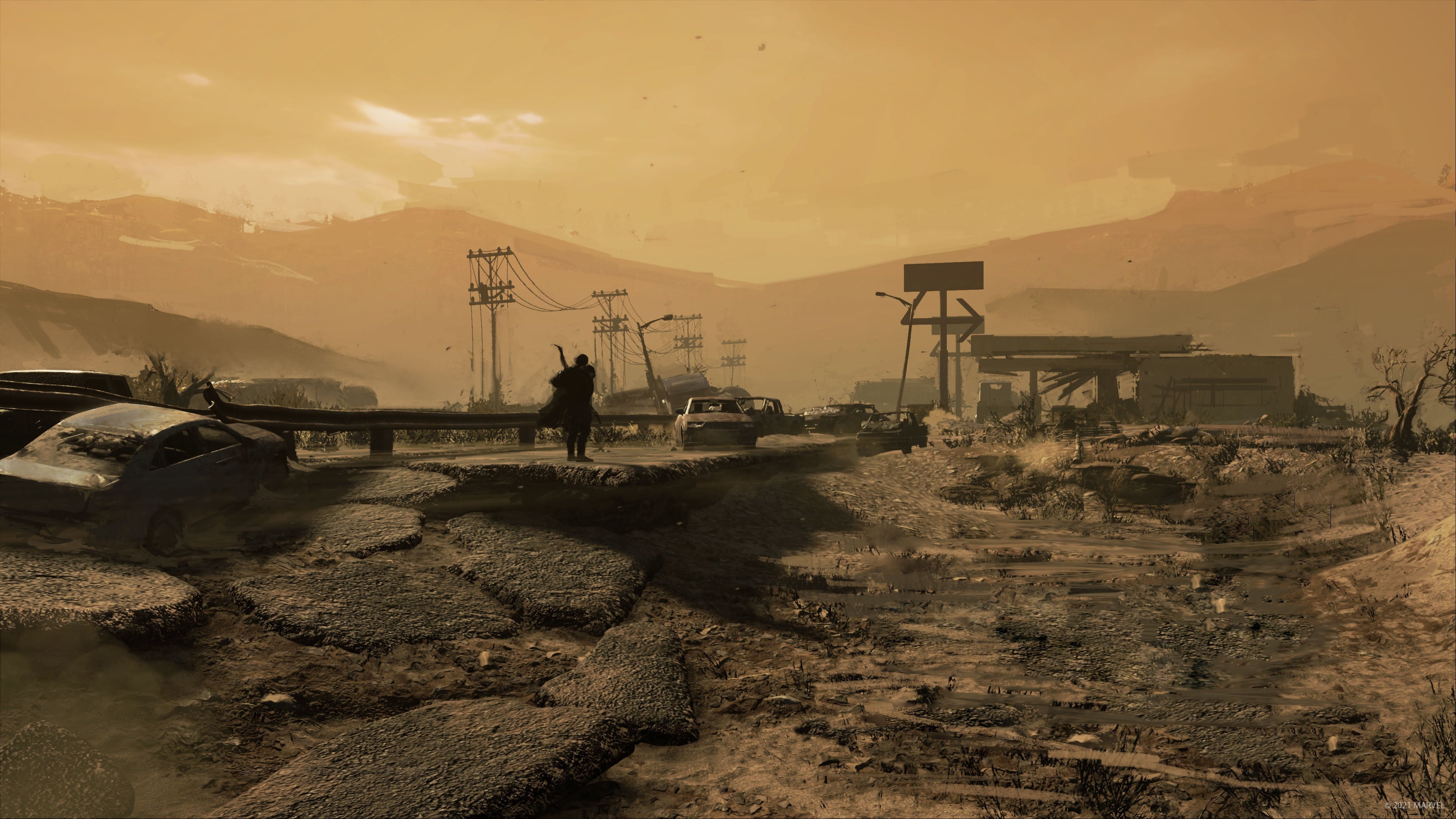 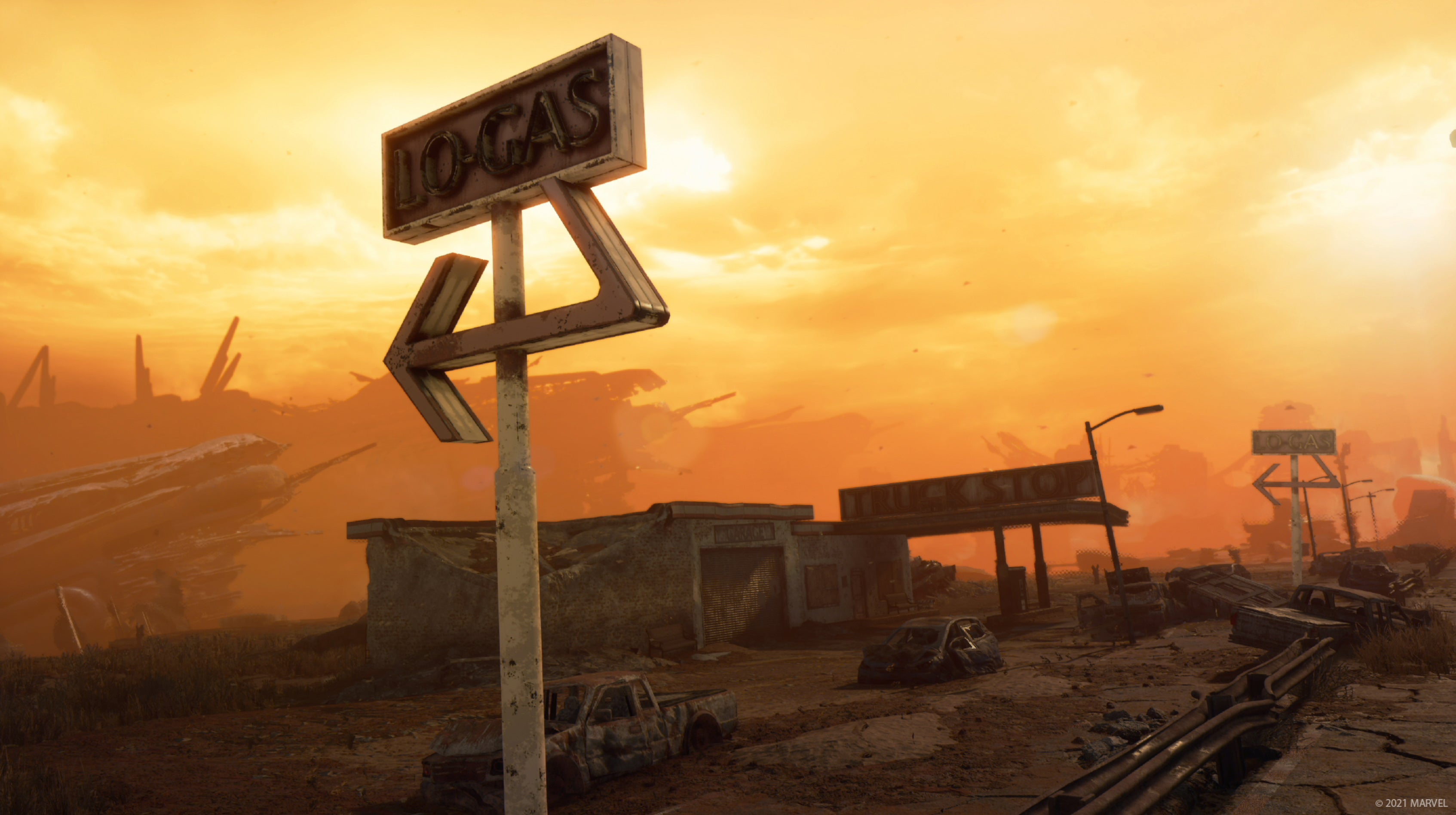 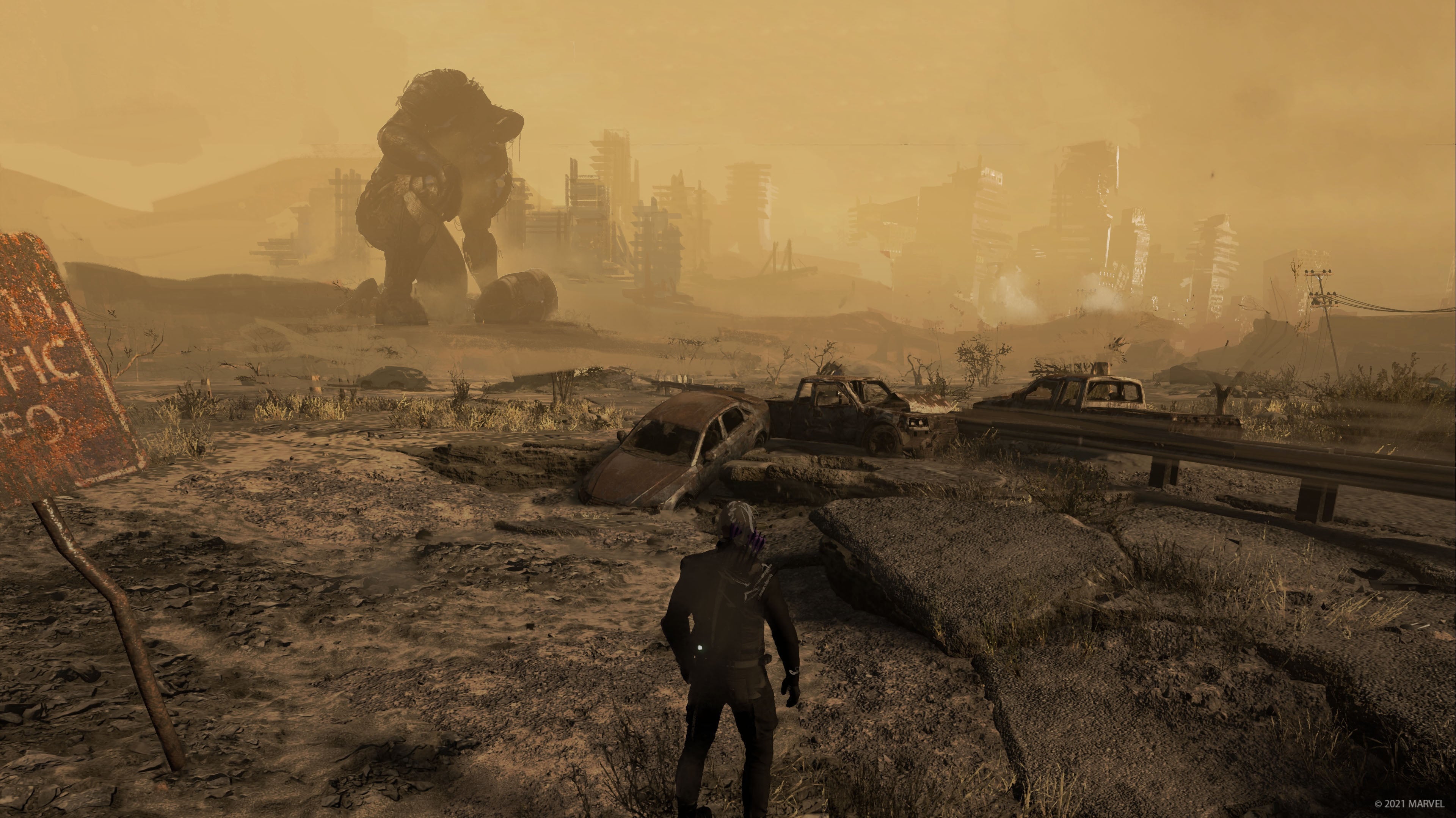 We originally planned for the look to be more sandy and grey, but after playing it extensively, we settled for a more colorful orange look that has more punch than the muted look in the early concept art. 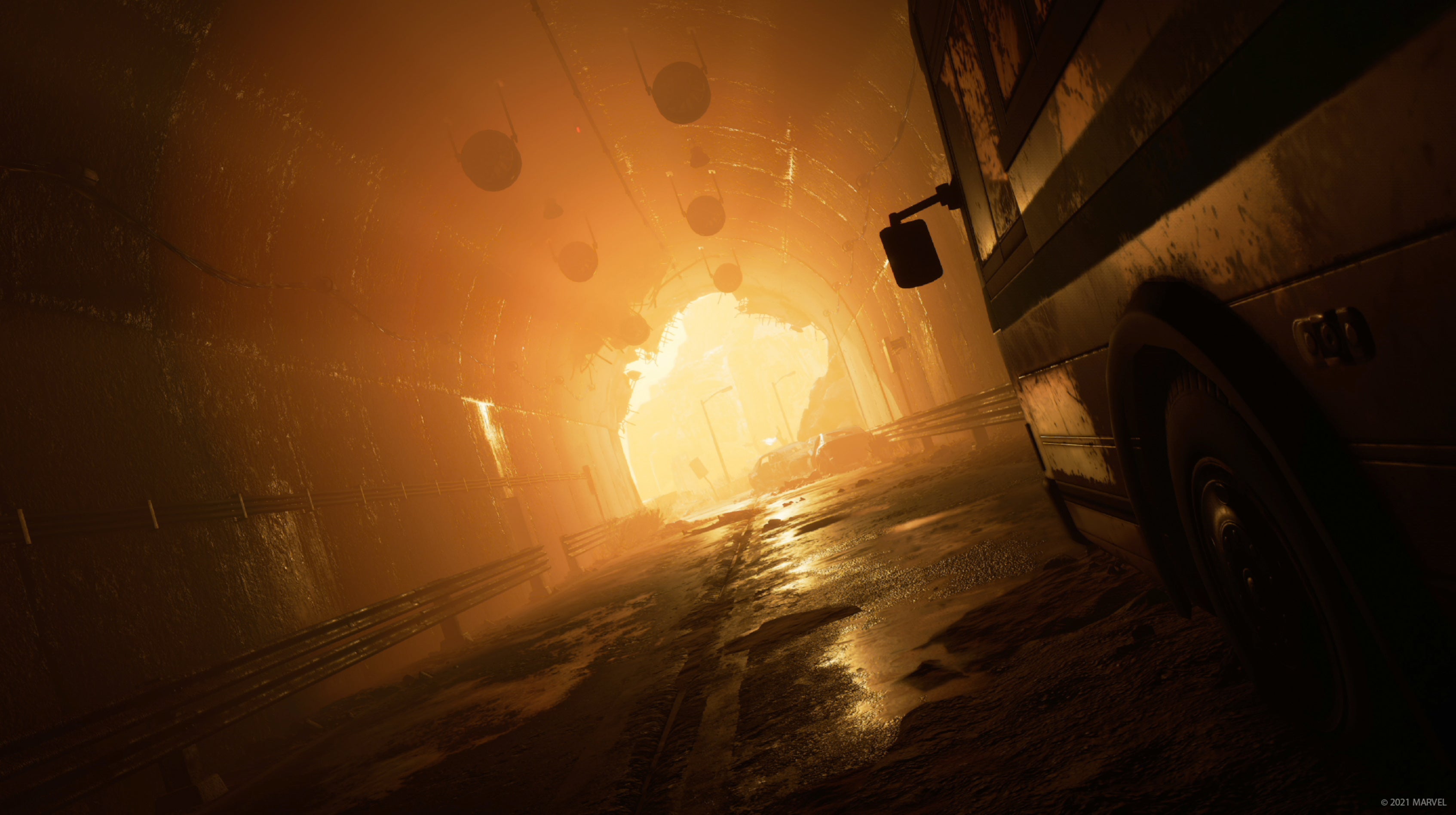 The Kree Sentries were an early focus point for us when designing the Wastelands. There is one Sentry in the Reassemble Campaign, and it was a terrifying herald of what was to come. In the Wastelands, there are lots of them strewn across the landscape, and these are just the ones that were defeated in the battle. Some have landed on top of structures, others are half buried in the landscape. 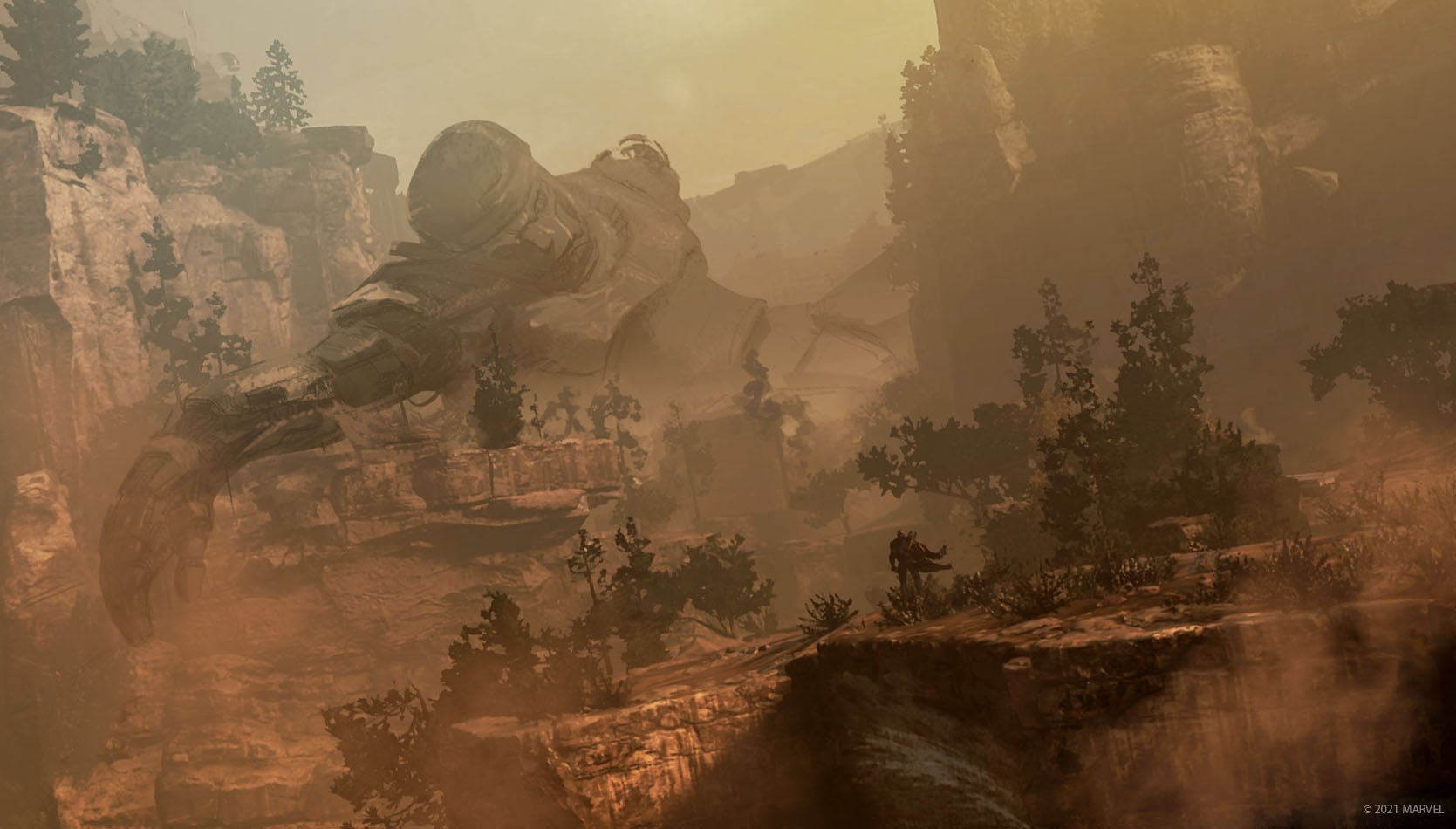 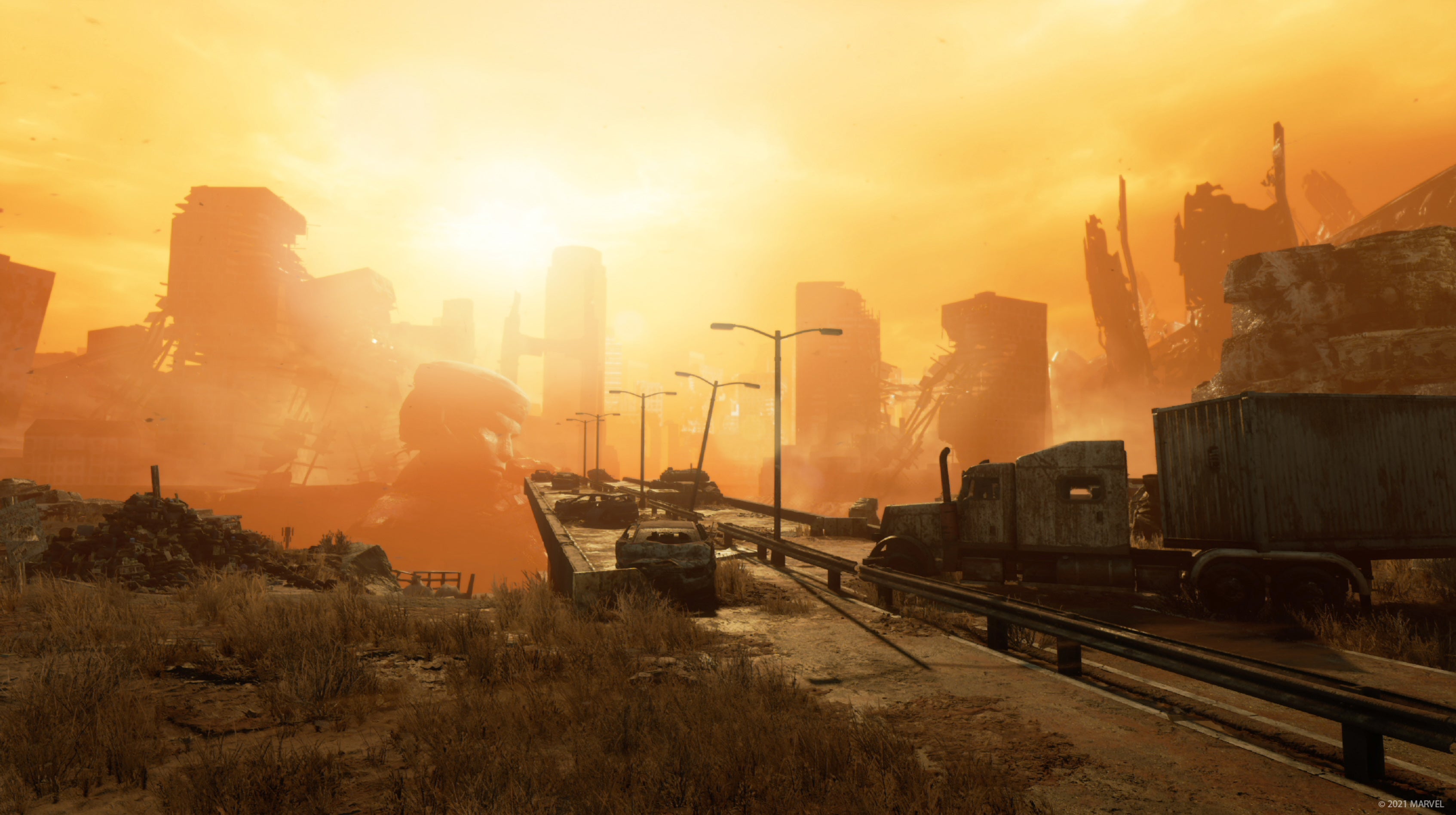 (Notice the sentry beyond the bridge, crashed into the city?)

We hope you enjoyed getting a glimpse of how we created the Wastelands. We’ll have more concepts to share after the WAR TABLE Deep Dive: Hawkeye on February 16, which get into more spoiler territory. Thank you for reading!