Black Panther: War for Wakanda, our biggest Expansion to Marvel’s Avengers yet will be out on August 17 - TOMORROW. In our War Table for Wakanda video, we broke down all the changes, features, and fixes coming to the game, but if you haven’t watched the video, here’s a quick recap!

War for Wakanda is a free update for anyone who owns the base game. The Expansion tells an original Black Panther story inspired by the comics and consulted on by Black Panther writer Evan Narcisse. Ulysses Klaw has infiltrated Wakanda’s borders to mine the nation’s precious Vibranium, putting King T’Challa’s leadership to the test.

The King, of course, is our new playable Hero. Black Panther’s abilities reward defensive play – blocks and parries build your Intrinsic Meter that when full allows you to release a burst of kinetic energy. He can also be played as a fierce predator too, with a unique pounce mechanic that lets you grapple large and small enemies to the ground, attacking them with your Vibranium claws. 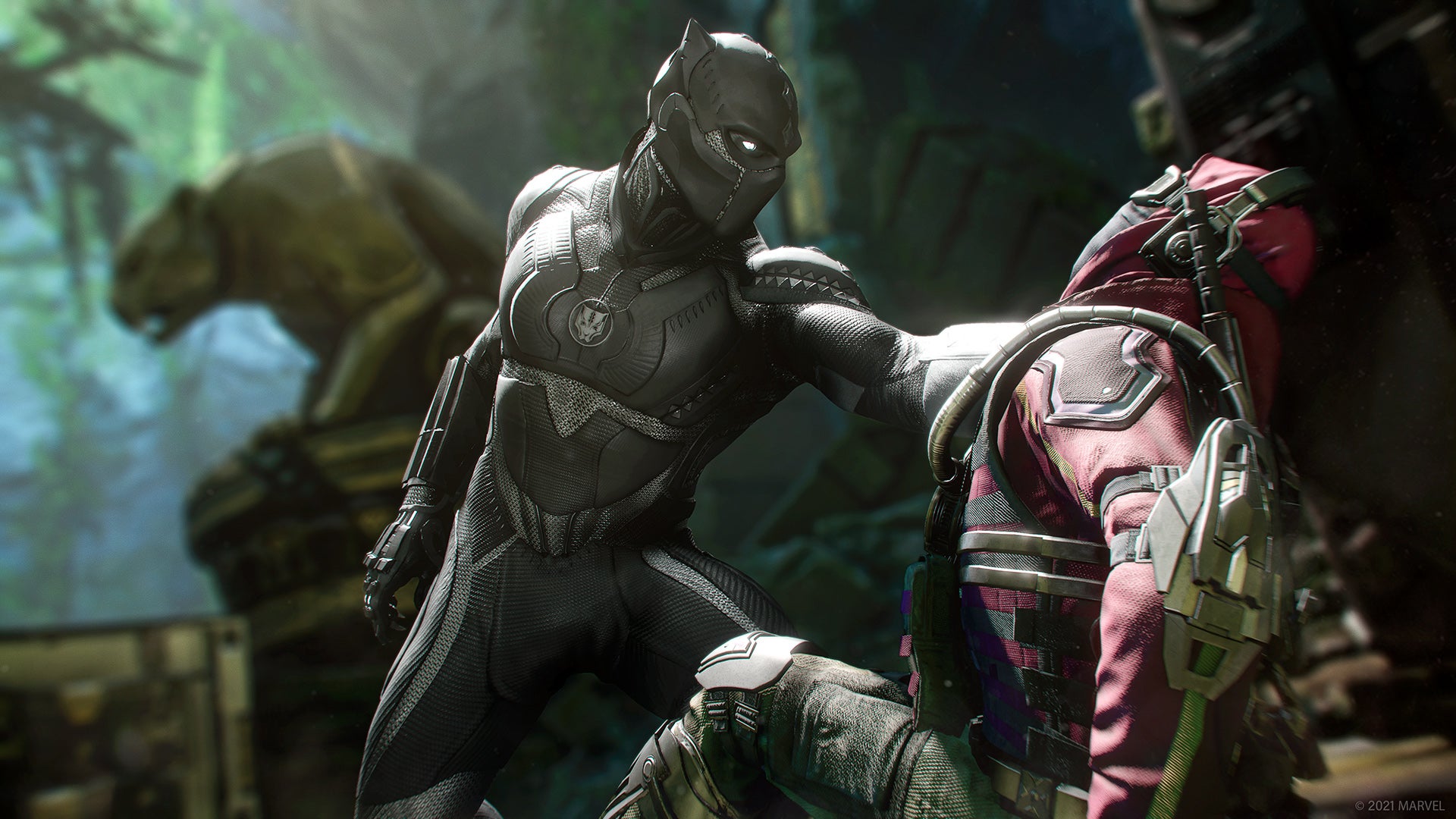 You’ll need these abilities to take on Klaw’s militia. The new enemies we’ve introduced in War for Wakanda introduce new elements to combat like Vibranium-armored enemies, drones that fly above the battlefield and debuff your Heroes, arachnid-like robots that attack you in large numbers, and more! We’re also introducing two new Villains to the game – Klaw’s sociopathic head lieutenant, Crossbones, and Klaw himself. 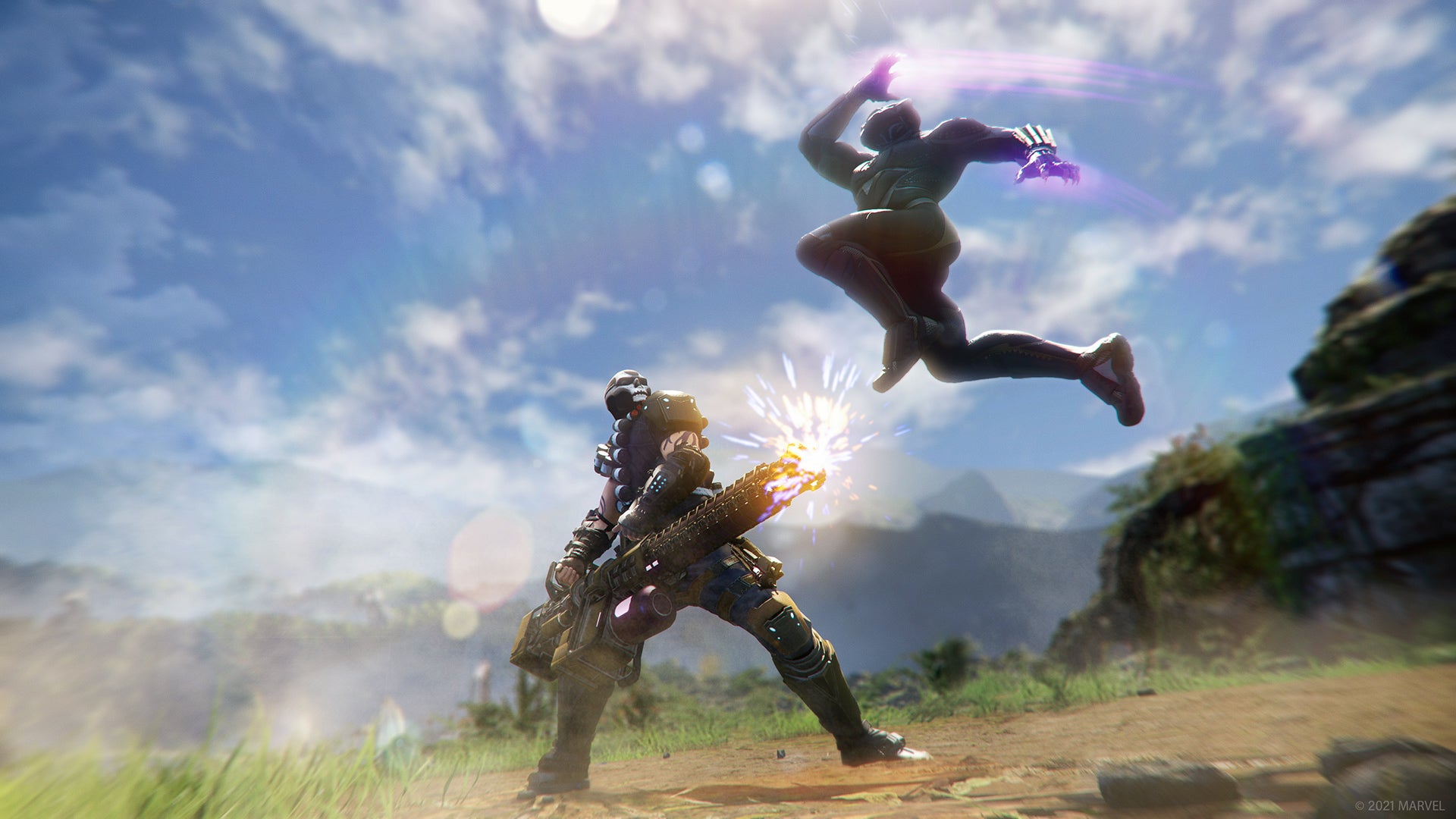 The War for Wakanda goes down in our new jungle biome that’s unlike any other in our game. Traversal is dangerous – temples and caves are protected by Wakanda’s advanced defense technology, and some areas require careful platforming to avoid deadly pitfalls. In between missions, you’ll return to our new outpost – Wakanda’s capitol building in the heart of Birnin Zana. Here you can interact with our new cast of characters, which includes T’Challa’s sister, Shuri, leader of the royal guard, Okoye, and the royal family’s mystical adviser, Zawavari.

Speaking of our characters, we assembled an A-list cast of incredible voice talent to bring our story to life. God of War’s Christopher Judge takes on the mantle of T’Challa, Star Wars Jedi: Fallen Order’s Debra Wilson plays Okoye, The Walking Dead game series’ Dave Fennoy plays Zawavari, and Star Wars: Rebels’ Steve Blum plays our villain: Ulysses Klaw. Beth McGuire, the vocal coach who helped develop the Wakandan accent in the Marvel Studios’ Black Panther, worked closely with our voice cast as well to make sure the accent in our Expansion was properly delivered.

Finally, we’ve made big changes to our character menus and overall user interface to make managing gear and navigating menus speedier and more intuitive. You can now “mass dismantle” items in your inventory, and you can access your gear locker from anywhere now too, instead of only accessing it from an Outpost. Your feedback is important to us, so make sure to let us know your thoughts on these changes!

If you haven’t picked up Marvel’s Avengers yet, now is the time! The free War for Wakanda Expansion adds to a game already packed with content including hours of single-player story content across several campaigns, nine playable heroes, and endless multiplayer co-op action for up to four players. In addition, new modes and events are introduced regularly, and dozens of outfits inspired by Marvel comics and movies are available to customize players’ favorite Super Heroes.

The War for Wakanda has begun! So suit up, Avenger!