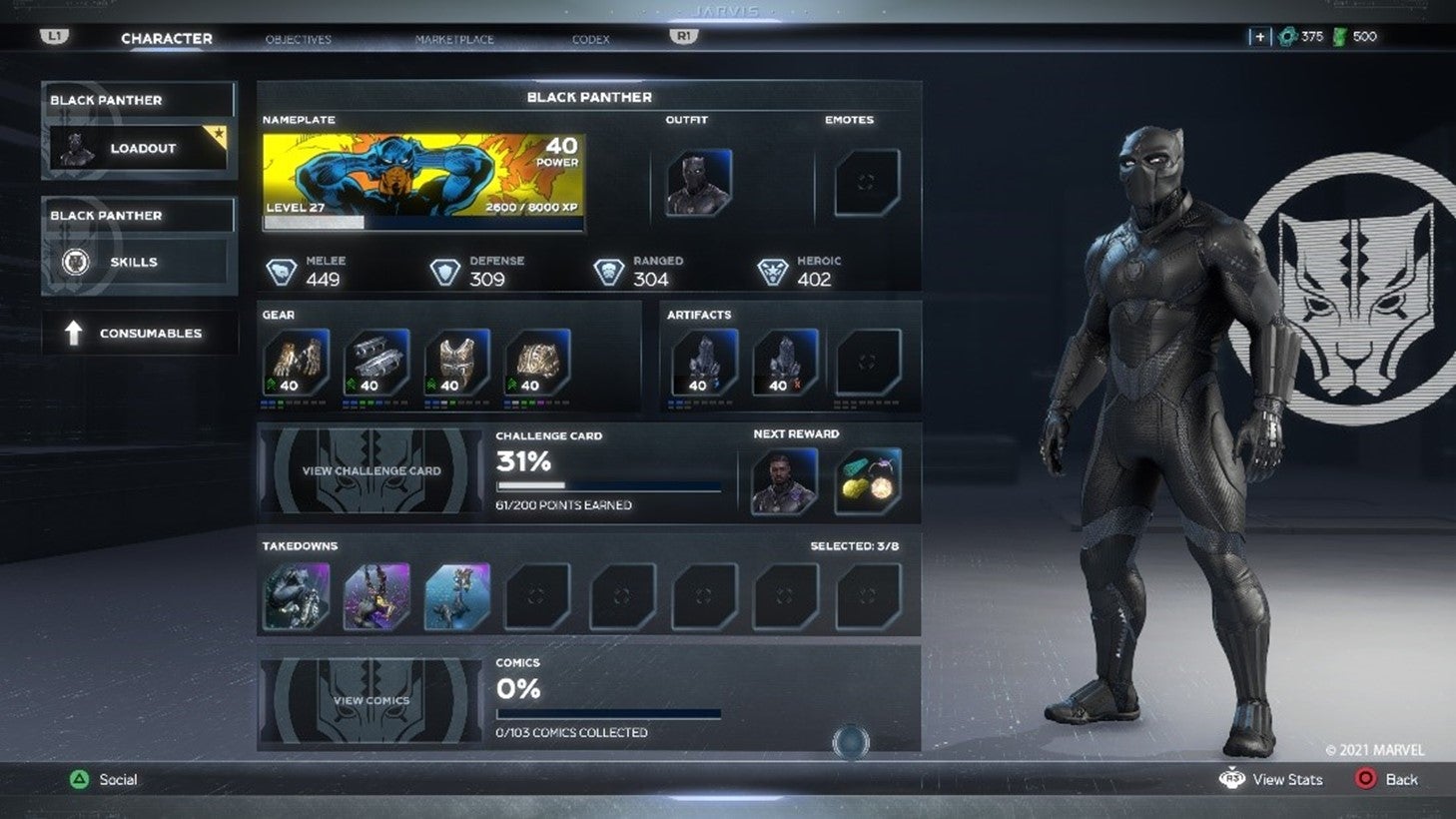 Gear is a large part of what constitutes a Hero’s combat prowess and is essential in building your Hero to play like you want them to play. There are 7 slots for gear: Melee, Ranged, Defense, Heroic, Minor Artifact #1, Minor Artifact #2, and Major Artifact. Each of these types of gear contains various stats, Perks, a Power Level, rarity, and upgrade potential.

All gear has a rarity to it denoted by the color of the tooltip:

Overall, rarity affects stats and the amount of Perks each gear piece receives. There are also Named sets, which you can hunt for and have more expected stats versus random pieces. Let’s go over more specific intricacies of gear below.

For a guide on knowing what gear to equip, here’s an incredible video from revealingtoomuch - Ultimate Avengers Gear Guide: How To Decide What's Good

If you have played the game before you may be aware that some things in Avengers are a little differently than other games, like Health being called Willpower & Stamina being Intrinsic, amongst many others, so I'll be going over each stat and explaining its industry standard counterpart, but also what it affects when it comes to your moveset. Right, let's dive into it!

Thank you to @BobDuckNWeave for writing this section!

You may notice that some of the stats on current type of gear is fixed or rolls within a group of certain stats. Here's a list of some possible stat rolls for existing gear currently (you may have old gear which don't follow this pattern) that I've noticed with the help of the community.
2-3 stats out of the following:

Perks are special effects on certain pieces of gear that will drastically alter and improve how your Hero plays depending on what you equip. Always think about what kind of build you want to go for, whether that’s the most damage or something as fun as sending enemies flying around you. Perks found on gear can be found for all Heroes or are Hero-specific.

The list of Perks on each piece of gear can be viewed on its tooltip. The amount of Perks on a piece of gear varies. Common gear has no Perks while Legendary gear has 3. In order to unlock some Perks, you must upgrade your piece of gear. Please look at our Upgrade Gear section above for a guide on how the system works.

Avengers Science Table has a growing list of all Perks that can be found on each Hero. Check them out!

Major Artifacts are a type of gear that have unique effects and Perks, which can all be activated and used in combat. On PlayStation, activating a Major Artifact is done by pressing L3+R3 together. Major Artifacts are also shared amongst all your Heroes, although they must be upgraded individually using Polychoron. While Major Artifacts don’t have a designated Power Level, they do add additional Power Levels to your total, which means it is well worth the upgrades, especially due to how important they can be in combat.

Here are a list of current Major Artifacts, their effects, and where you get them:

For a complete guide on how to Upgrade Gear, please head to our developer blog HERE.

Nanite, Nanotype, Catalyst, and Plasma (Removed as of November 2020)

Thank you to @HighrulerLive for providing the list of currency!

If you want a detailed breakdown of gear, including named sets, where to farm certain gear, and a list of Perks, head to the Avengers Science Table, managed by /u/frobones from Reddit.